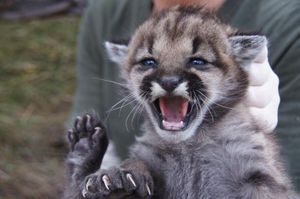 “National Park Service biologists affixed tracking devices recently on male and female kittens born to one of the adult female lions already being tracked through the mountain range. The newborns, believed to be six to eight weeks old, are now designated P-23 and P-24. They were found in the mother’s den near Circle X Ranch above Malibu and were released back into the wild.

Unfortunately, DNA testing conducted at UCLA found that the cubs were fathered by P-12, who also was the sire of the cubs’ mother, P-19.”

P-12 is obviously getting in some good training.